There is a surge of interest in organo-gelators and supergelators. These are molecules which can be added in low (or very low) quantities to an organic solvent and create a gel. Examples of such gelators are shown in the image below. There are numerous potential uses from optics to cosmetics.

Historically it has been a rather hit-and-miss affair to find a suitable gelator for a specific system. In addition to the usual issues of cost and safety, actually finding a gelator is hard. What works well in one system might be useless in another. What's needed are rational guidelines for choosing a suitable molecule.

It's clear that solubility plays a big role in the choice. If the gelator is insoluble in the solvent then it will never gelate. But if it is very happy within the solvent (i.e. it is too soluble) then it has no possibility of forming the strong intermolecular networks (bordering on a semi-crystalline network) required for gelation. 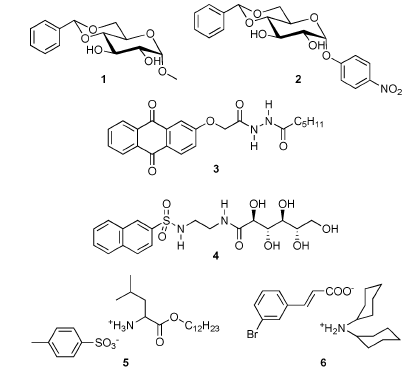 It would then seem a good idea to use HSP. A number of the top organogelator groups are now doing so. A good example is the group of Prof Laurent Bouteiller at UPMC. The paper Matthieu Raynal and Laurent Bouteiller, Organogel formation rationalized by Hansen Solubility Parameters, Chem. Commun., 2011, 47, 8271–8273 is highly cited and explores the behaviour of the gelators shown in the image (by kind permission). 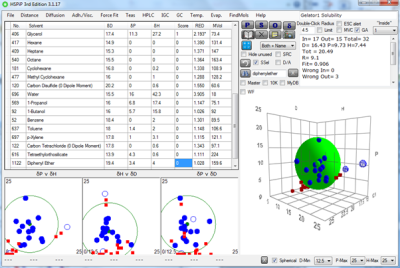 Taking gelator 1 as a specific example, it is possible to create a classic Hansen Sphere that describes the solubility properties of the molecule. All the solvents in blue are "good" solvents and all those in red are "bad" ones. The HSPiP software automatically determines that the molecule has HSP of [16.4, 9.7, 7.4]. This means that for any new organic solvent (or formulation) with HSP near that value (within the radius of the Sphere) the gelator will be useless - it is too soluble. And it will be equally useless for most of those solvents that are outside the Sphere as the gelator is insoluble. Why "most"? Because of the second Sphere that can be constructed.

But now let's do the same process but with the definition of "good" being gelation and "bad" being solubility or insolubility. Now we get a very different Sphere with HSP [18.6, 1.9,2.3] in a very different part of HSP space - much less polar and hydrogen bonding.

What is especially useful about HSP is that these Sphere tests can be done quickly on a large set of standard test solvents - ones that might never need to be gelled. Such a standard set can readily be dispensed by a robotic system and a human researcher can readily score each tube as gelled, soluble or insoluble ready for input into the software. From this approach using standard test solvents it then becomes easy to pick and choose a gelator for any given real-world system. As we've seen in Solvent Blends, the HSP of a mixture is the volume-weighted average of the components. Knowing the sweet-spot for good gelation, and knowing the HSP of the components of the blend it is straightforward to find blends that will be good gelators or find ways to tune between gelation and solvation under chemical control.

That's the theory and there is evidence that such an approach can work. It will require more systematic investigation (perhaps aided by high-throughput systems to measure the Sphere values) to find the limits of such a technique.

For those wishing to read more on this subject and see the original images in higher resolution, feel free to download Chapter 29 The HSP of gel formation.pdf from the HSPiP eBook. It includes some pioneering gelation work within the paints industry by Charles Hansen.

A prestigious "Invited Feature Article" in Langmuir further advances the discussion. The group led by Prof Michael Rogers from Rutgers were able to use HSPiP and Y-MB to analyse the gelation properties of one specific gelator. It was then possible to compare and contrast the HSP approach with others such as Kamlet-Taft. As the abstract says: "...it is an instructional blueprint for how to assess the appropriate type of solvent parameter for use with other molecular gelators as well as with molecules forming other types of self-assembled materials". Langmuir's policy is that such feature articles are Open Access, so feel free to download this important paper: Comparing and Correlating Solubility Parameters Governing the Self-Assembly of Molecular Gels Using 1,3:2,4-Dibenzylidene Sorbitol as the Gelator.

A recent development in which Charles played a key role uses HSP concepts to carefully balance the formulation of wet-on-wet flexographic printing inks to allow gel formation between the applying the successive colours. This development promises to transform the flexographic printing industry into a greener one. It involves a careful balance in the formulation so that evaporation of a volatile component causes the completely soluble binder in the ink to gel. The HSP moves upon evaporation of this component from boundary-good to boundary-bad for the binder or segment thereof. This has allowed a major reduction of the volatiles in such inks. Recognizing that gels can be broken by shear, such as with paint brushes or spray guns, it was theorized that it might be possible to use this technique to allow multicolor printing by flexography. This was found to be the case. Now it is possible in commercial flexographic systems to print multiple colors with no release to the atmosphere. The ink is a liquid on the print rollers because of the shear, and gels very shortly after application to the substrate. The gel on the substrate can easily withstand the pressure from subsequent printing rollers. The composite ink is then ultimately cured by radiation.