One of the many difficulties of dealing with CNT is that they seem to be rather incompatible with many solvents. However, given that C60 is reasonably soluble and its HSP can readily be measured via the Sphere technique (C.M. Hansen, A.L. Smith, Using Hansen solubility parameters to correlate solubility of C60 fullerene in organic solvents and in polymers, Carbon, 42 (2004) 1591–1597 ) to be [19.7, 2.9, 2.7] it seemed to at least two groups, Coleman's in TCD and Delhalle's in Namur, a good idea to attempt to measure the HSP of CNT.

The data here have been kindly supplied by (now) Dr Simon Detriche at Namur and were generated during his PhD work. His first attempts at this were scientific: to measure a solubility parameter you must first measure solubility. But it became apparent that the whole PhD would be taken up by trying to pin down what that actually meant. Instead, the classic Hansen technique was used of testing whether CNT dispersions were "happy", "unhappy" or "totally miserable" in each solvent. Skeptics might be unimpressed by such language. But asked to score the following 4 tubes, each treated the same way (short sonification followed by short centrifugation), there would be few to disagree that the one on the right is "happy" and the one on the left is "totally miserable". It is even easy to distinguish degrees of (un)happiness by looking at all four tubes. Although this photo is from the Detriche thesis, Abbott has seen these tubes himself and can confirm the scoring. 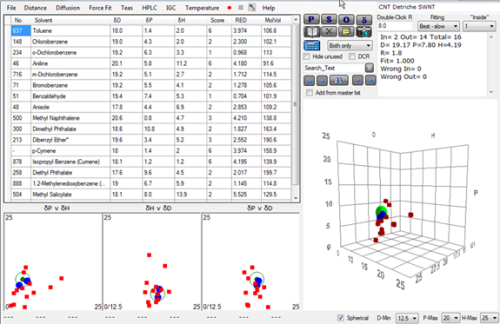 From a large dataset, Detrich was able to obtain a good Sphere fit of the data. This says that CNT are [19, 8, 4]. The similarity to the values for C60 is striking and the fact that both have very high δD; values is a key reason why it is difficult to dissolve them - because high δD; solvents are generally highly aromatic and chlorinated, and high boiling. The work went on to show something very interesting. "Functionalised" CNT gave a very poor fit within the same sort of experiment. A closer examination and a use of the Double Sphere fitting mode suggested that the sample was bi-modal. There was a broad Sphere of very hydrophilic (acidic) functionalised tubes and a small Sphere close to the original CNT position, suggesting that super-pure CNT are immune to the harsh oxidising acid treatment of functionalisation so remain within the sample.

The Coleman group in TCD have bravely gone out on a limb. Instead of using coy words like "dispersed" they have strong evidence that in good solvents the CNT are actually soluble and have gone on to describe a theoretical formalism that brings solvents, polymers, 1-D CNT and 2-D graphene into the HSP framework. These are early days, but Abbott for one is convinced that using "solubility" in the context of nanoparticles is a meaningful concept. For further discussions of all these issues, references etc. see the book by Abbott and Holmes Nanocoatings: Principles and Practice DesTech Publications, 2013.

This question of solubility of nanoparticles has caused some lively debates within the HSP team (it is even included in the Nanoparticles page). Steven is the extremist: "As Coleman shows, there is no logical cut-off point between molecules and nanoparticles where the concepts of solubility cease to be relevant". Hiroshi prefers a definition such as "Only when the solvent changes the surface morphology of the particle will I say that the particle is soluble." The academic community seems generally confused. A paper on nanoparticle "solubility" in the title generally used the word "dispersion" in the text of the paper itself. Interestingly, Hiroshi's deep interest in predictions of surface energy effects in conventional areas such as inkjet printing may map on to a description of the energetics of a nanoparticle within a solvent. If there is a very low interfacial tension between the particle and the solvent then by definition there is little enthalpy loss in creating the particle/solvent interface. And then solubility comes down to entropy. As Coleman's papers show, the entropic effects can be massive. Or, to go back to Detriche's work, shorter CNT are demonstrably more soluble than longer CNT. If you take a solution/dispersion of CNT, evaporate the solvent and measure the average length of the CNT they are much shorter than the particles that were not taken up into the solvent.

Once graphene had been discoverd, it became important to find ways to handle it via methods other than adhesive tape. Along with sophisticated gas/vacuum phase processes, solvent-based exfoliation became popular and there are plenty of HSP-related papers revealing that the HSP of graphene are not too far away from those of CNT.

Beyond graphene, other 2D materials have been developed, each facing the same issue of how to make practical coatings. A 2018 paper, Daisuke Nakamura and Hideyuki Nakano, Liquid-Phase Exfoliation of Germanane Based on Hansen Solubility Parameters, Chem. Mater., DOI: 10.1021/acs.chemmater.8b02153, (from the same Nakamura group cited in the Ceramics example), shows that the classic HSP sphere test on 2D Germanane (GeH) solutions/dispersions can reveal two key features of this material. First, its HSP [24, 11, 18] with a very high value for δD, second that it (or their specific version) is a rather variable material presumably (as they say) from oxidation or water impurities during the processing, which might also explain the rather high δH value. From the HSP values they were able to choose a rational solvent, 1,3 dioxolane, that met their solubility requirements as well as the practical requirements (rapid evaporation to avoid amorphisation) for creating a thin (3nm!) coating of GeH.

This is clearly not the end of the story. As the authors conclude: "We selected the best solvents for the exfoliation of GeH based on the HSP and hope that these discussions will be useful for the liquid-phase exfoliation of other 2D materials."