Considerable amounts of brilliant science have gone in to the creation of solar cells based on organic molecules. In the lab, on samples 1cm² one can create devices which seem to offer adequate performance at astonishingly low cost. In principle the devices can be manufactured by the kilometre on high-speed printing/coating machines.

There are many reasons why such devices haven't made it to the big-time. One reason was that the typical "bulk heterojunction" OPV cells only worked if there was phase separation between the conducting polymer and the substituted C60 or C70 Buckyball, i.e. the hole donor and electron acceptor respectively. In the lab this was easily done. 30min in a moderate oven was all that was required for the phases to separate spontaneously. So simple! Yet totally impractical for production!

A famous lucky break with a thiol component (added for totally different reasons) showed that it was possible to achieve phase separation spontaneously during the drying process. With the thiol as part of the formulation there was no need for the subsequent impractical heat step. Of course the aroma of thiols doesn't make them good candidates for production, but this new idea for OPV was seen as very exciting.

What was a new idea for OPV was old news for HSP. For decades, paint/coating formulators have known that with the right choice of solvent blend you can get different phases within a coating to either stay together (if that was required), separate out early in the drying process or, for high-gloss coatings, for the glossy part of the formulation to come to the surface and remain in solution up to the very last moment so it retained its full gloss. The trick is to know the HSP of the key components then to tune the HSP distances during evaporation (see Solvent Blends for an explanation of how the HSP of a blend changes with volume % of each solvent. Here are some possibilities:

It should now be clear how this applies to OPV. By measuring the HSP of the conducting polymer and the Buckyball it should be possible to design a rational solvent blend to ensure phase separation during drying. Work by Florian Machui within the group of Prof Brabec at U. Erlangen did just that: 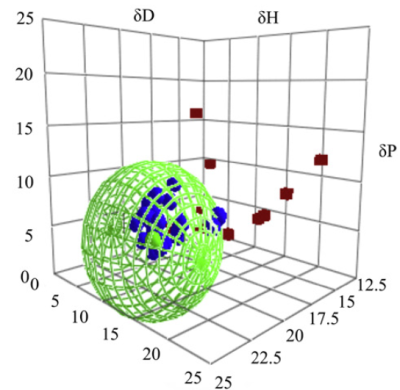 However, the HSP fits produced by the classic Sphere technique with a variety of solvents had some problems, especially for the complex conducting polymer (not shown here), and it was very hard work to assemble many different solvents. And the technique was not able to specifically explore a region of HSP space if there wasn't a suitable safe solvent in that area. 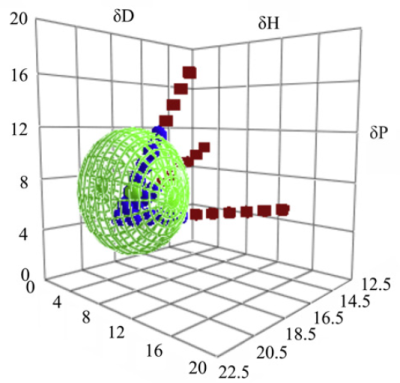 Here the starting point was chlorobenzne a known good solvent for the Buckyball PCBM, and a "titration" in three different directions in HSP space with known bad solvents DMSO, acetone and isopropanol. It was much easier to pin down the exact centre and radius of the Sphere using this technique. For the polymer the results were also much clearer than the traditional technique.

With such a technique it is now possible to screen many more pairs of potential donors/acceptors to see if spontaneous phase separation will be possible and, if so, which solvent blend could be used to ensure that the right phase separated at the right time during the evaporation, avoiding the equally bad possibility of a total phase separation into two layers.

Since this ground-breaking paper, the Grid technique has been incorporated into the HSPiP software and is proving particularly popular for those with high-throughput robotic systems.